Why You Should Use A Masked Credit Card To Shop Online

Whenever you buy something with a credit card online, you also have to provide your name, number and address, information seen by the processing banks as well as the merchant. What if you don’t want them to know who you are, or you worry that someone may hack into the merchant’s files?

Boston privacy company Abine has introduced masked credit cards that allow you to use their address, any name you want and a one-time number. Once a user signs up, the program quickly fills out the merchant’s online form, making the service faster than entering out your card details each time. This week the company announced that through Christmas, they are waiving their normal $5 monthly fee for MaskMe. 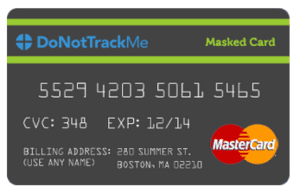 “Our vision of future is that a large amount of people whenever they are making a transaction have the choice of whether to make that transaction more private or not,” says Rob Shavell, the CEO and co-founder of Abine.

During a beta over the past few months, only tens of thousands of people have had access to the premium Abine service which includes the ability to use masked cards. About a quarter of users embrace the service for all of their credit card purchases, the rest turn to it from time to time.

“So for example, they don’t use them at Amazon, but at any new vendor that they haven’t used before where they are not sure about their security practices,” Shavell says. “Another category where masked cards are used a lot is where people that have had data breaches.”

This includes “a lot of people when they buy Adobe software because Adobe had a big breach where they lost everybody’s credit card two or three months ago. We’ve seen a spike in users that are buying Adobe products and services with masked cards, understandably so.”

In October, Adobe said hackers had accessed data on 2.9 million users including names and encrypted credit card numbers. It later upped the number to 38 million customers. Other experts say the breach may have led to the release of more than 150 million records.

Even if you used the Abine masked card with Adobe, the hackers could have accessed your email address (this site shows if your email address was compromised).  Abine’s MaskMe also offers a free service of creating one-time email addresses, so that Adobe might have one address bouncing to your main email address, Amazon another, Facebook a third and so on.

If you are ordering a physical item from a merchant, you have to give your real address, which defeats part of the logic of using a masked card. Abine says in the future it will introduce a shipping solution that would reroute packages to you. Masked cards also allow you to block recurring charges on subscription-based services by setting a limit to the payment.

Some banks, including Bank of America, Citibank and Discover, also offer one-merchant unique credit card numbers, but they do not allow users to create a fictitious name and use a different address. American Express offered one-time card numbers from 2000-2004 but then discontinued the service.

So how do you know if you can trust Abine or other companies promising to protect your privacy, while providing them with data you want to protect? I used their masked card service a few times and it worked fine. I have met several of their top executives and believe they are protecting user data as they advertise.

Of course, few consumers will be able to interview their privacy company personally, so here is Shavell’s advice: “Thoroughly investigate, if you will, the company that is offering the service,” he says. “All we can tell people is here we are, we’ve been in business for four years, we have tens of thousands of positive reviews from users that have used our services.”

“If we were doing anything wrong we think it would have seen the light of day.”

In fact, during the beta of the masked cards, Abine itself was often scammed. About five percent of users attempted to initiate fraudulent transactions. They’ve now reduced that number to less than one percent, Shavell says.