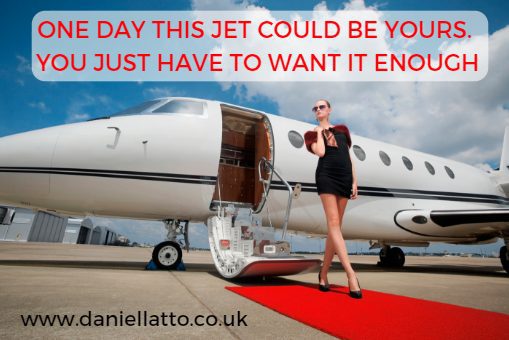 I just want to share this with you so that you can see an example of the difference between how a poor person thinks and how a successful person thinks.  I see this with people that I bump into on my travels.  You can see where someone is at and where they are going by the level of conversation that they have.  If you want to stay in this kind of level then that’s fine.  It’s your choice.  If you want to be successful then this isn’t going to be a level that serves you and you need to start changing to a higher level.  Of course, there might be a need to change your social circle to make this happen.

This conversation happened while I was travelling to the UK from my villa.  On the plane I was sat to a couple that were really nice people but when we got talking beyond the fluff it was clear that there was a vast difference between the level of conversations that we have and also the mindset that we have.

They asked me where I had bought my villa and I told them that it was rented.  They asked me when I was going to buy a property over here and this was when the shift in levels of conversation happened.

I told them that I had no plans to buy as it was dead money that I could use to make more money with instead.  He looked a bit blank so I said,

This is the kind of level that I think at.  I look at the long term potential and what my choices will cost me and also what they have the potential to bring in.  That’s the difference between a successful mindset and a poor person’s mindset.

Now this guy went into the usual thing that I hear when I say to someone that I’m a landlord.  “Well it’s all well and good saying that but you could end up buying them and everyone of them will be empty for 6 months.”  The majority of people just don’t get it and will try to bring you down to the level of fear that they operate from.  Whether you allow them to take you down there is your choice.  Always remember that it is a choice.  You can choose to ignore their fears and carry on at your own level.

So I responded with

Oh well it’s really easy to stop that from happening.  All you do is when you find the property is that you go over your figures and work out what it’s costing you each month and also how much you need to receive in rent to cover your costs and make the right amount of profit for it to be worth your while.  Then you put an ad out on Gumtree or in the local paper advertising the house for the price you want and see if you get 10 people interested.  If you do then you go ahead with the sale and you will close the deal with at least 1 of those 10 people.  You set your viewings up to run one after the other until you get a tenant.

Now the response that I got to that it so typical of people with a poor person’s mindset.  They are so blinkered in what they know that when they are presented with something outside of what they know they just dismiss it instantly.  Can you guess what he said to me?  “Sounds like you’re running a scam.”  To be honest that was the end of the conversation for me.  I can only show people the door but it’s up to them whether they walk through it or not.

To be successful, this is the sort of attitude that you need to adopt as well.  When you come across people with such a small mindset you can choose to show them the door if you like.  If they choose not to walk through it, let them go and go about your way.  Don’t bother using up your energy trying to change them because it will only frustrate you.  Save your energy for something more productive.  Let them think that you’re crazy or that you’re a scammer.  That’s their problem and not yours.  Go out there and do your thing and create the lifestyle that you are working towards.