The Most Disruptive Companies in 2013

They work hard, concocting wild ideas and products that can take entire industries by storm.  These companies are executing on big ideas that are driving profound change by challenging conventional markets and making incumbent companies completely re-think their strategies

Ten years ago, surfer Nick Woodman created a contraption out of a broken surfboard leash and rubber bands that allowed him to attach a disposable camera to his wrist for easy operation when the perfect wave hit.  Today, GoPro has become a meme.   People these days don’t film their skateboard rides or mountain bike rides. They GoPro them!  The cinema-quality, panoramic “point-of-view” footage that comes out of a GoPro is nothing short of breathtaking.    Everywhere you go, people are turning themselves into human-powered video reels, delivering a unique experience to capture life’s most exciting moments.

Whether in the hands of amateurs or film professionals, sales of GoPro have been taking the market by storm.  In 2012, GoPro was responsible for 21.5% of digital camcorder shipments nationwide, selling 2.3 million cameras and knocking out other top-selling marquee brands such as Sony.

Fiverr:  What can 5 bucks buy you? 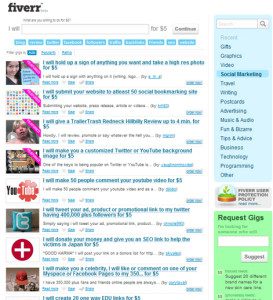 The Gig economy is an entirely different kind of economy to what we know as traditional employment.   It is the new labor force of entrepreneurs which is growing rapidly around the world and could soon represent as much as 50 percent of the U.S. workforce.  The tasks are usually small in nature and entrepreneurs make money based on their ability to deliver a steady volume of services.

Fiverr is a leading marketplace that features thousands of entrepreneurs who offer most of their services for just $5.   So what can you get for 5 bucks?  You’d be surprised.  From getting professional stationary designed to a producing a jingle, the site can likely satisfy most small tasks that can be done online.  All “gigs” get facilitated through the Fiverr platform, which includes payment, communications between the buyer and seller, and of course feedback!  Offering 2+ million gigs in 120 categories and servicing more than 200 countries around the world, Fiverr was founded by Micha Kaufman and Shai Wininger in 2009.  They bring in revenue by taking a 20% commission from each sale that is fully facilitated through their platform.

Tesla: Just getting warmed up 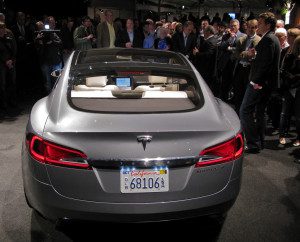 It’s been a remarkable year for Tesla Motors.  Early in the year, founder Elon Musk took on the New York Times with a masterful argument after NYT reporter John Broder claimed that the Tesla Model S fell short of its projected range and ended up on a flat-bed tow truck.   Later this year, The Model S went out to outsell Porsche, Fiat, Buick, Jaguar, Land Rover and five other companies in California, according to a report in QZ.   It also outscored every other car in tests conducted by Consumer Reports and was awarded the highest possible safety rating by the U.S. National Highway Safety Traffic Administration.

While the competition focusing on big volumes and declining profits, Tesla took on and disrupted a small segment, which the big companies initially didn’t care about, but rest assured that with the impressive sales figures posted by Tesla, the competition is quickly starting to take notice.  Tesla is setting the benchmark as a new kind of automobile manufacturer, pioneering new retail, supply chain and after-sales service practices as demand outweighs supply and buyers continue to line up to take delivery of every unit that rolls off the assembly line.

Netflix:  Back in the game, stronger than ever

For a few years, the name Netflix was used as a meme for disruption as it was notoriously famous for upending the era of video rentals.   However, after a failed tactic to split up the company in 2011, many observers had all but given the firm up for dead after bottoming below $54 in the summer of 2012.  In 2013, the video streaming company has been on a tear, rallying more than 400%.  Netflix has created a classic case study in corporate comebacks by sticking to not so traditional strategies.  Instead of rushing to change and restructure, Netflix showed patience. It learned from its past mistakes, stuck to its strategy and ignored the naysayers.

Netflix always had a unique asset that other media companies and broadcasters didn’t, its innovative customer research armed Netflix executives with the data to grasp the various idiosyncrasies of its audience and allowed them to continue to focus on the individual customer, delivering content they want and like.   With continued focus on the customer, Netflix freed subscribers from traditional TV schedules when it decided to release entire seasons of TV shows like House of Cards and Orange is the New Black .  Now, it is considering going even further and shortening the time we have to wait for the next season to start.

AirBNB:  Overtaking the largest hoteliers in the world

The San Francisco Internet company which offers a marketplace for people to book vacations in other people’s homes has been growing like wildfire and raising the eyebrows of the top players in the hospitality industry.   The company has served a total of 9 million guests in the five years since being founded while growing its bookings more than 73 times in the last 3 years.

InterContinental and Hilton have more than 650,000 rooms combined.  AirBNB currently has an inventory of 500,000 rooms and growing.   At the current pace of growth, AirBNB expects AirBNB to overtake the two groups next year with a profound impact on how accommodations are sourced and booked.