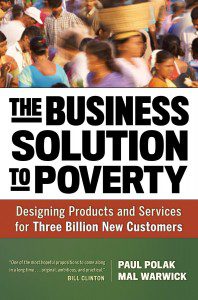 Paul Polak was a social entrepreneur before it became sexy to be one. Polak first joined the global community of “do-gooders” in 1981 as founder of iDE, a social enterprise that pioneered foot-powered pumps for poor farmers in Southeast Asia. The rudimentary irrigation technology has reportedly reached 19 million farmers in the world, thanks to iDE’s efforts. Polak went on to create D-Rev, the Bay Area-based design company that concocts new designs (on a budget) for the “other” 90%, he says.

Polak is 79 years old but still zipping the globe to deliver electricity, water, and other basic needs to the world so-called “bottom billion.” His latest book, The Business Solution to Poverty, co-authored with non-profit guru Mal Warwick, looks at the nitty gritty of the social innovation space.Polak spoke with Esha Chhabra at his Denver residence about the new book, the need to scale, and the imperative changes needed in the sector to get real results.What do you hope to achieve with this second book, The Business Solution to Poverty?I want to create a global movement to end poverty for 2.7 billion two-dollar-a-day people. It takes off where the first book, Out of Poverty, left off. It addresses the problem of how to reach scale by creating a new breed of frontier multinational. In the book I describe every practical step required to create a new big business that has three goals: to transform the livelihoods of at least 100 million two-dollar-a-day customers, to generate annual revenues of at least $10 billion, and to earn attractive enough profits to bring in commercial global investors.What is your advice to people before they launch a business?Over 25 years in starting and running iDE, I learned that the first step is to talk to people as customers rather than recipients of charity, and to find out what their needs, preferences, and aspirations for the future are. Then you build the technology and the business strategy around what you learn. The process of learning shapes what you do in designing the technology and operating the company.At what point should a company scale?At the point at which you have the first idea to do something. You don’t scale anything by creating a project and then tacking scale on the end of it. You accomplish scale by keeping scale in mind from the beginning. I won’t touch anything unless it has the potential—if successful—to reach 100 million two-dollar-a-day customers. That means that you have to do the winnowing process at the very beginning.To reach 100 million customers, you really need a problem that affects a billion potential customers, because a realistic target is to reach 10 percent of the market. So you start thinking—and it really is a question of thinking differently—what are the problems that have a billion potential customers? Well, there are a lot of them: there are a billion people who don’t have access to safe drinking water, electricity, affordable nutritious foods, education. There are just under a billion people who need eye glasses but don’t have them. There are probably a billion people who need crop insurance—it can be as specific as that. And the list goes on and on.When you pick a problem, you plan from the beginning to ultimately reach a scale of 100 million. In my case, I see that happening over a 10-year process.Do you collaborate with non-profit organizations?The central operating style is to run everything as a for-profit business, but we will work with other organizations.For example, in the drinking water business, part of the issue is public education: people in the village have to be brought up to speed on the relationship between drinking bad water and illness. For now, we’re trying to cover that deficit through for-profit, blitz marketing approaches. But in the future, if there are customers we can’t reach by the commercial method, we might work with granted non-profits who help with public education—we’re not against bringing in organizations that can help reach that market.The question is: what kind of market penetration do you want to reach? We’re shooting for 50 percent; we’re able to reach 30 percent now. Maybe to reach the last 20 percent we’ll need some collaboration with non-profits.What changes do you want to see as social enterprise evolves?There are a lot of problems with social enterprise. It’s sort of like saying ‘sustainability’ and ‘green’—it becomes popular and loses all meaning.One of the biggest problems is that there is a huge tendency for young people to be attracted to self-congratulatory conferences and incubation processes that help them make elevator pitches, write business plans, and market what they’re doing. But unfortunately, it often takes them away from doing the grunt work that’s needed to start a business on the ground.I think it’s backward. Unfortunately, the charity model is based on having good marketing to raise money to support the charity, and that often puts the cart before the horse. The non-profit development organizations that are successful know how to market, but they often are weak in making it actually work in the field.I would like to see social entrepreneurs start by going to where the action is, talking to the people who have the problem, listening to what they have to say, and doing the grunt work in the field. And then coming back and improving their skills at elevator pitches.

This story is written by Esha Chhabra and Ben Thurman, brought to you in partnership with Dowser.org, a media organization that reports on social innovation, focusing on the question: Who is solving what and how?