A cursory look around LockerDome’s St. Louis-based headquarters might give the impression that it’s just like any office in a tech hotbed with its wide open layout, large bar, and pop-a-shot hoop, where two employees are playing what appears to be a heated game of P-I-G. However, to mistake LockerDome, a popular social media site with nearly 20 million unique monthly visitors and more than $8 million in funding, for just another startup is to miss the critical details — like the fact that the lights are off mid-afternoon on a Thursday.

“Did you guys lose power?” I asked LockerDome CEO Gabe Lozano as he showed me around their 7,000-sq. ft. space. “No,” he replied. “Two of our developers just finished a 20-hour stretch of work, so they’re asleep in the dorms.” He is not joking.

In many ways, the LockerDorms, as they are affectionately known, are a hallmark of LockerDome. No one has ever been told to sleep in the office or put in a 20-hour blitz, but it’s been 73 days since at least one of the dorms wasn’t occupied overnight. One developer hasn’t slept in his own bed in seven weeks, having taken up full-time residence in the office as part of the push to release the new platform.

These are not simple cots for employees to slip off to for 15-minute naps after lunch; these rooms boast three-stack bunk beds that almost touch the vaulted ceilings. With showers in the office and plenty of food at the bar, those who stay are well taken care of.

“We believe in the power of working both smart and hard — it’s proven to be a great formula for understanding what we need to get done and making it happen. We will outwork and out-produce anyone,” Lozano said. “But the commitment these guys have shown goes beyond that; it shows just how badly they want this team to succeed.”

The launch of LockerDome 3.0 is the focus of the office, even for the employees who will never touch a line of code. It drives the company’s singular vision. The path to this point, however, started far from the LockerDorms.

“One of the trademarks of a champion is that he can outlast you.” ~Lou Brock 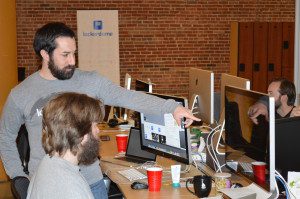 Lou Brock’s quote is not only at the end of Lozano’s emails, but it also adorns one wall of the office, and it’s an apt description of LockerDome’s history. While growth has been strong since early 2012, it took years to get the company moving. The idea for LockerDome was hatched some seven years and 16 offices ago, but it wasn’t until 2008 that the company began to take even its sparest form.

Facebook exploded in 2008, topping 100 million visitors and surpassing MySpace for the first time, which naturally produced an army of imitators trying to achieve the same level of success in the social networking space.

“From day one, we have believed that some content and conversations are better served outside of Facebook, but at the time, we had little understanding of what that actually meant,” Lozano recalled as he began to articulate why LockerDome 1.0 fell flat on its face. Friends and family tried their best to be supportive — one of LockerDome’s 17 offices was Lozano’s parents’ house, where he and a co-founder lived for nine months — but many of them didn’t even make profiles on the fledgling site.

In order to differentiate the platform from the legion of Facebook clones clogging the social media marketplace, Lozano took a step back to reexamine the broader question of what needs were being adequately addressed by the dominant players and which still remained unanswered. In doing so, Lozano reaffirmed his belief that while Facebook adeptly joined users with the people they knew — connections that, arranged visually, present as a social graph — it was ill-equipped to help users connect around their interests.

The same visual concept can be applied to a person’s interests — this is known as an interest graph — but with many times the number of available connections. Having determined and articulated the underlying dynamics within the interest graph and armed with the lessons learned from their initial efforts, LockerDome continued to determine where it fit within the burgeoning marketplace.

To keep the company moving forward, Lozano settled on a new approach: Paying customers could form hyperlocal communities around their interests, a function that many amateur sports teams found appealing. Slowly, the company began to gain steam, but it was severely limited by the lack of connectivity between these communities, as well as by the relatively small market for amateur sports. By the end of 2011, Lozano knew that for the company to achieve serious scale, it needed to be rebuilt with a larger target market and with a way for users to join multiple communities.

A conversation between Lozano and Jim McKelvey, co-founder of Square and a LockerDome investor and board member, solidified this new direction. In particular, McKelvey — whose strategic vision is an invaluable asset to the company, according to Lozano — suggested an aggressive push into the professional sports space.