It's A Bird, It's A Plane…It's Amazon Prime Air?

It’s been all over the news — Amazon is flirting with the idea of delivery by unmanned drones. The service, which the company is calling Prime Air, would take the two day shipping guaranteed on Amazon Prime purchases and up the ante. The goal of Prime Air would be to get packages to customers in as little as 30 minutes. 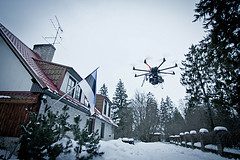 During a demonstration video on 60 Minutes, Amazon CEO Jeff Bezos showed how the drones, or octocopters, would pick up packages in yellow buckets at Amazon fulfillment centers. The drones would then fly to customers’ locations (identified by GPS). Bezos said the company could possibly have the service up and running in four years.

Amazon also made headlines (though probably fewer) this week when the U.S. Supreme Court declined to hear a pair of cases challenging New York’s “Amazon” law. The decision lets stand a 2008 state law that broadens the definition of vendor to include some remote sellers.

New York broadened the definition of vendor in N.Y. Tax Law section 1101(b)(8) to provide that persons making sales of property or services are “presumed to be soliciting business through an independent contractor or other representatives if the seller enters into an agreement with a resident of that state under which the resident” is paid a commission or other consideration for referring customers to the seller. That definition essentially requires vendors that use an affiliate marketing program to collect sales tax. Affiliate marketing is a marketing tool that rewards individuals for each visitor or customer brought to a vendor’s website via a link on the individuals’ own website.

It’s a tenuous connection and one of questionable constitutionality. But the U.S. Supreme Court won’t hear the case, so the law will stand in New York, and likely in the numerous other states that have similar laws.

Although the two news developments concerning Amazon seem unrelated — a Washington Post article noted that “Amazon met with skepticism from legal experts and Supreme Court justices Monday on two very different aspects of the company’s vision for the technological future: sales taxes and delivery drones” — what if they aren’t? Are there sales tax implications if Amazon switches to delivery by drone from delivery by common carrier?

In general, if a business is merely selling products online and shipping them to a state by the U.S. Postal Service or common carrier, sales and use tax nexus won’t be triggered. Any — and I mean any — other contact with a state could result in sales tax nexus. Common carriers are typically defined as transporters that offer services to the public, maintain their own schedule, and do not engage in substantial contacts with the recipient. This includes some air carriers, trucking and railroad companies, ships and ferries, and sometimes even taxis and car services.

It seems unlikely, at least initially, that an unmanned drone owned and operated by Amazon, would fit within the definition of a common carrier. That could mean Amazon is making deliveries other than by mail or common carrier, which could create sales tax nexus for Amazon in the state where the deliveries are made.

Nexus determinations can be extremely complicated and fact specific, so nothing is certain yet. But it is noteworthy that the creation of a new delivery system will have sales tax implications, albeit not the same ones at stake in the New York cases. In the end, perhaps this is simply further indication that Amazon is shifting its business model in favor of immediate delivery and giving up the sales tax nexus fight.