Is The Marshmallow Experiment Hurting You And Your Business? 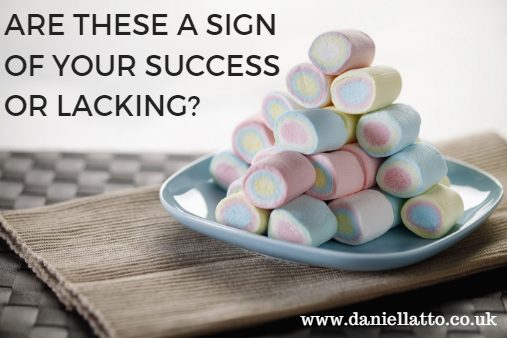 The way that we are told to think and be by society these days can be potentially very damaging for us.  It is a way of keeping us playing small and locked into this cycle of accepting less than what we are really worth.

It encourages to spend money we don’t have on things that we don’t need.  To throw away objects and people without making any real effort.  to give up on our long term plans to settle for something that is often less than average.  We are encouraged by those close to us to eat chocolate rather than say no and get to our weight loss goals much faster.

I often say to people this phrase because once you truly understand it, your whole life can change.

What Is The Marshmallow Test?

The marshmallow test is a test that was done by a teacher to see how kids would react to a challenge and how this would relate to their future self.  The teacher wanted to know if by using a simple marshmallow, they could differentiate between two types of people.  So here is the test.

So what happened?  95% of the children ate the marshmallow within half an hour.  Only 5% waited and received a second marshmallow.

So what did that mean for the children in the future?

They checked the grades that were achieved by all of the children involved and found that the 5% that waited achieved higher average grades than the 95% that ate it within the half hour.

How This Is Affecting You And Your Business

Now you might be naive in thinking that it’s only a marshmallow and what does that really have to do with my success?  Well look at the quote above one more time.  If you are going to be more interested in instant gratification than long term success, is your journey to success going to be easier or harder?

What type of property deals are you going to chase and which ones will s;lip past your periphery because you were more interested in getting that quick fix rather than the long term implications?

As a society we are accruing more and more bad debt.  Debt in itself isn’t a bad thing and can be a great way of making money.  A mortgage on a rental property for example is a good debt.  It makes you more money than the debt costs so it is useful to you. Spending money on a credit card isn’t in itself a bad thing.  Using a credit card at a 0% interest rate to offset against your mortgage can be a good debt with the right deal.  Borrowing on a credit card at a rate lower than your mortgage interest can also be classed as a good debt.  Paying for training or coaching on a credit card that is going to bring you a higher rate of return than what you have spent including the interest is a version of good credit card debt.  Spending money on clothes that you are going to use personally or maybe even never wear at all is bad credit card debt.

People try to rationalise it by calling it retail therapy.  You feel sad so you go and accrue more bad debt in order to make yourself feel good.  Can you see how crazy that is?  If you haven’t realised this fully until now then I hope that this wakes you up.  How much is that bargain that you’ve put on your credit card costing you over the lifetime of repayments that you have to make against it?  Is it still a bargain after you add up the initial payment along with the interest payments?  If you have invested that into something that will pay you money, how much have you lost out on as a result?  By playing along with this idea that shopping is a kind of therapy you are making it harder for you to become financially free.  You need to do the maths on all of this to see what it is really costing you.

If you have bad debt, work to clear that debt first.  Stop spending money that you don’t have on things that aren’t either essential to your survival or paying you back more than what you are paying out.  When you’ve cleared that bad debt start to put that money that you were paying out and start investing it in assets that are going to start paying you.  That’s the way to do it folks.  Start being the person who will sit there with their marshmallow and not eat it for half an hour and double your returns.  The way you thought as a child doesn’t have to be the way that you think as an adult.  Start saying no to the things that are taking you away from your goals and be patient enough to reap the rewards.