Interview: Yuri Milner On The Rise Of Xiaomi And Celebrity Scientists 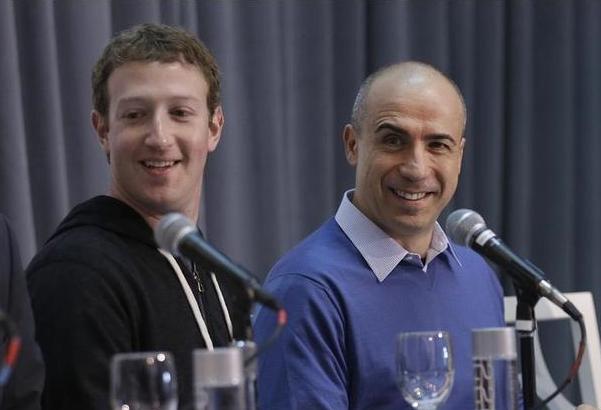 Yuri Milner, right, with Mark Zuckerberg at an announcement for the Breakthrough Prize in Life Sciences in San Francisco, Feb. 20, 2013

For the last few years, Russia’s Yuri Milner has been the investor any Silicon Valley startup worth its salt wants to hook up with. He was one of the first, major backers of Facebook in 2009 and has since steered investments in a handful of late-stage Internet giants like Groupon, Spotify and AirBNB through DST Global, the investment fund he manages. Having led a reported $400 million funding round in Twitter in 2011, DST’s stake is estimated to have been worth $1.2 billion at the time of the company’s IPO in November. Milner himself has also piled money into a string of early-stage companies, including 23andMe, Genapsys and Coursera.

Recently he sat down with Forbes to talk about how the makeup of DST had changed — sovereign wealth funds from China and the Middle East have replaced Russian billionaire Alisher Usmanov as primary backers — why he loves Xiaomi,  a upstart mobile player in China, and why he started the world’s biggest monetary prize in science. He said he was surprised by the growth of Snapchat, but believed there was money to be made from ephemeral communication. He also expects to see 50 Internet companies with a market cap of more than $5 billion in the next decade. Milner rarely gives much away on detail, but he’s clearly still bullish on the growth of global Internet powerhouses.

FORBES: How did DST Global do on the Twitter IPO?

MILNER: We’ll have to wait and see when liquidity comes, but the Twitter team is doing a very impressive job, and we as investors are very happy. We are a very small part of the story, and it’s a validation of the late-stage investment strategy. [Twitter] is an amazing service. To be able to provide this platform for some people to influence other people is a very important function in the world, and done in a very inexpensive and transparent way.

What are some of the big themes that are driving your investments now?

I think the biggest change in the last ten years is that many people are connected now. There are two and a half billion people who are connected to each other and to information, and that drives these amazing business models. We need to store this information in the cloud and search it, so then Google comes. You need to communicate more efficiently? Facebook. You need to shop more efficiently with all the information about goods in one place? Here comes Amazon. All these business models are driven by one simple fact: that everybody is connected. So as time goes by more and more people get connected, the screen size changes. It gets smaller. It becomes mobile. But fundamentally it all drives only one parameter which is the number of connected individuals and the frequency of usage.

One of the interesting themes we have been thinking about is who makes the devices. We found an interesting company in China called Xiaomi. It’s a company we like a lot and there is a visionary founder behind it and a strong team. They have a chance to build one of the first consumer brands inside of China, and outside of China. It is really an interesting phenomenon, and very rare. Consumer brands are complicated and you need to understand things about people. Xiaomi has this interesting magic that people stay in a virtual line to buy their products.

The way they sell is truly amazing. They don’t have any stores, and so it’s Internet-driven sales. They have these periodic auctions where they just auction X number of phones, and all these phones go in a matter of minutes. Then they close the store because they don’t have any inventory left. Then they open again in a few days and then they sell again in a matter of minutes. So they are open for very short periods of time for business.

And every two weeks they’re rolling out software updates.

Our latest investment is Lending Club. This is another company that emerged based on… helping to connect lenders and borrowers more efficiently. In fact, everything can be done in a more efficient way as long as everyone is connected. The basic business model is in a way similar for everyone but the nuances are different.

So It’s about connecting people in an efficient way.

And then using connectivity to iterate on existing business models.

As Xiaomi does, as Lending Club does. For example, do you need such huge overheads to take money from some people and give it to other people? Maybe the overheads can be dramatically lower. Maybe you don’t need the offline banking infrastructure for this. Right? So essentially the lending business can be optimized, and if you optimize it then of course you can provide it in a cheaper way. So essentially you cut out a lot of intermediation, and that’s what Internet technology is about.