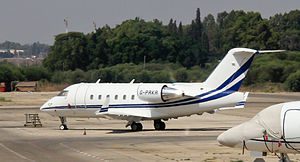 The Bombardier Challenger 604, what an insurance agent to the Forbes 400 drives. (Photo credit: Wikipedia)

When the chartered airplane that was to fly him from Orange County, Cal.  to Wichita, Kan.  didn’t  show up, life insurance super-agent Michael D. Brown missed his scheduled meeting with David Koch and Charles Koch, the billionaire brothers who control Koch Industries, losing out on a potential $8 million commission.  After that episode,  Brown told the U.S. Tax Court last year, he realized that as an insurance agent to the Forbes 400—someone who had made as much as $17 million from a single insurance sale—he needed his own jet.

But the Hawker he bought couldn’t fly nonstop from California to New York, where the most billionaires reside, and so Brown started shopping for a big-boys jet. He stepped up his search in May  2003, when,  as part of the second round of Bush tax cuts, Congress enacted a special bonus depreciation for certain property placed in service before Dec. 31, 2004.  Through PrivatAir, Brown identified a $22 million Bombardier Bombardier Challenger 604 that fit the bill, and, having had a particularly lucrative 2003, rushed to place the jet in service and claim an $11 million bonus depreciation deduction for 2003.

In a 54-page decision issued today, complete with references to F. Scott Fitzgerald, Ernest Hemingway and the Forbes 400, U.S. Tax Court Judge Mark V. Holmes  ruled that the new jet wasn’t really put in service until 2004 because Brown was awaiting modifications, including installation of a conference table. But the opinion also includes some juicier details: the government, Holmes noted, contended that  Brown had grossly understated his income by tens of millions and had “claimed fraudulent consulting-fee deductions, used nominees to conceal ownership and control of entities from the IRS,  and created many false documents in an attempt to support illegitimate deductions.”

In May 2012, just a week before the trial over all those claims was to begin, Brown settled every issue but the jet with the government.  According to Holmes’ opinion, Brown agreed that his taxable income for 2001 to 2006 should be adjusted upwards by more than $50 million, and that $10 million of those adjustments would be subject to the (rarely imposed) 75% penalty for civil fraud. The total bill: more than $20 million in back taxes and penalties. Brown’s lawyer, Michael C. Cohen of DeCastro, West, Chodorow, Mendler, Glickfeld & Nass in Los Angeles, said Tuesday that he and his client had just received the decision and had no comment at this point.

Brown gained fame beyond the small world of big dollar insurance deals in 2002, when The New York Times reported that he and New York trusts and estate lawyer Jonathan G. Blattmachr (then with Milbank, Tweed, Hadley & McCloy) had devised a way that the nation’s rich could transfer hundreds of millions of dollars estate and gift tax free by exploiting a loophole in IRS regulations.  Three weeks later, the IRS issued a notice disallowing the ploy.

Among other things, the opinion notes, Brown wrote no policies for less than $10 million in insurance and had built up a national network of accountants and insurance agents who, if they “identified a Forbes 400 member pursuing an insurance program’’ would call Brown in and then share in his commission if he closed the deal.

The decision wasn’t a total loss for Brown. Holmes rejected a bid by the government to slap the 75% fraud penalty on Brown for his premature deduction of the $22 million jet, finding only a 20% accuracy penalty was warranted since Brown had shown “that he actually believed that he completed all of the steps necessary” to  treat the plane as put in service in 2003. Specifically, Brown took possession of it on Dec. 30, 2003, for one day, and had his pilot fly him from Portland to Seattle for a business lunch and then to Chicago to meet and have a pizza with another insurance agent he had mentored. (Later, Brown had his CFO/CPA present the Chicago agent with a letter to sign suggesting he was the one who wanted the “vital” last minute meeting.) After logging 4,000 miles on this plane on Dec. 30th, Brown flew on his old private jet back to Cabo San Lucas to rejoin his vacationing family for New Year’s.