How To Get Paid To Drop Your Own Leaflets 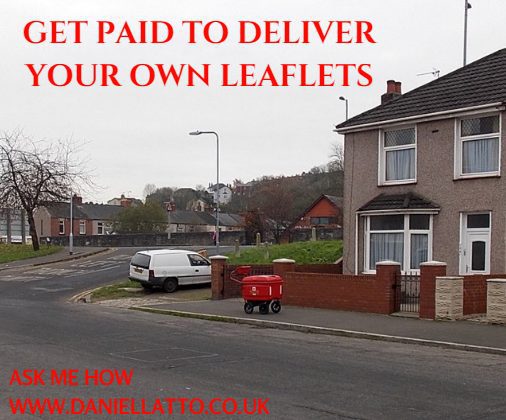 Today I am going to talk to you about how to get paid to drop your own leaflets.  Leaflet drops is one of the methods that I have used successfully over the years to find new properties but many people are put off of doing it.  The reason that so many people are put off of it is the cost involved.  So what I am going to show you now is how I drop leaflets and make money at the same time.

Getting a company to drop your leaflets for you can cost you around £70 per 1,000 leaflets of you have just yours dropped or it can cost you around £30 per 1,000 if you have them dropped with other companies.  The other method that people look at is dropping them all themselves.  Do you want to really do that though when the reason for doing this is to create freedom?

Instead I created a leaflet distribution company.  Here’s how I did that.

I used to have a lettings company alongside owning my own properties.  We used to advertise this through leaflet dropping with leaflets saying “We Buy Houses For Cash” and I would order 10,000 leaflets at a time.

What I would do then is I would go to the local hairdressers and taxi companies, etc and ask them who was dropping their leaflets for them.  Most of them would say something like “Well we don’t have any leaflets” which was perfect.  I would then make them an offer on the cost of designing their leaflets and also on the printing costs.  I would then charge them £40 per 1,000 leaflets of which let’s say they had ordered 5,000 which is a cost of £200.  I would then give that £200 to someone I paid to drop leaflets and they would have mine as well.

The leaflet dropper is paid £40 per 1,000 houses they drop at and I would have up to 5 including mine.  That means each 1,000 houses visited would pay us £120 plus our leaflets we getting dropped as well.

Making Sure That Your Leaflets Are Dropped

For each leaflet distributor I would provide a rucksack for them to put their leaflets in and attached to each of these is a GPS device that shows me where they have been.  Another thing you can do is go out and meet them to see where they are,  I always made sure that I employed at least 2 people per route.  Never employ 1 as you have a higher chance of your leaflets not being dropped but having 2 together is rare.  You can also ask them what the other leaflet dropper is like to get an idea of what is happening.

When I met the leaflet droppers I would hand them an invoice for them to sign from them to us.  They were always paid as self-employed and I encouraged them to take out insurance and arrange their own tax payments.  On the back of the form there was a feedback form on the other leaflet dropper so I could build up a database of contractors and pick out the best.

I always advertised on Gumtree for leaflet distributors.  I would specify that they were being paid £40 per 1,000 households visited so there were no discrepancies about the amount of leaflets,  I would also tell them that they were also going to be delivering 2 to 5 leaflets to each household.  When you are contracting people it is always better to be upfront and honest about what you want and what you expect,  This helps to create long-term working relationships between you and them.  Having to explain to people that delivering 3,000 leaflets will pay them £40 and not £120 is wasting your time and theirs.

People would click from the advert to a form to complete asking their details and which areas they would like to work in.  They will have to tick boxes saying that they agree to the terms and conditions including that they know they are working self-employed and are responsible for their own tax etc.

Calling up your local plumber and saying “We can’t drop your leaflets for you can we?” isn’t going to work.  Also if you tell them that you are a leaflet distribution company then they are going to instantly put their guard up because they know what you want straight away and will look to say no.  Instead try something like this.

“Hi my name is……… and I work for a local lettings agency.  We’re looking to build up more business in the local area.  As part of us doing that we are going to deliver 10,000 leaflets.  Now as part of that would you like us to deliver some of your leaflets as well and create some more custom for you too?”

That is a much better way of doing it.  There’s nothing wrong with making a script around this and trying different ideas out to see what works.  Getting just 1,000 going out for someone else means that 1,000 of your leaflets are going out.  Plus if they get a success from doing it you will have the opportunity to send out more alongside theirs in the future.

When you have the order from someone else you will have to have your leaflets ready to go as well.

I used to count up 5 piles of 1,000 leaflets.  This made it easier for counting and if you forgot where you were you had a much smaller amount to re-count.  When we had 1,000 we would put the pile side by side and measure with a spirit level.  Another way is to weight the leaflets out.

On sunny days I would go out and take cold drinks for them which kept them happy.  I would sometimes buy them a granny trolley and they could push those around instead of carrying a backpack when it gets heavy.

One of my clients sends out 3 leaflets at a time alongside his own.  He has 3 to 4 people working each time so that business is making him £240 to £320 each day that his guys are out working.  That’s something to think about isn’t it?

If you’ve found this useful please share it so that someone else can benefit from it too.