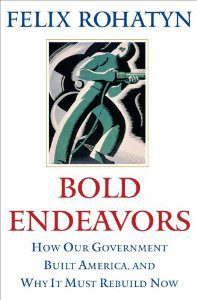 Evan Marwell gets bored every seven years. But when he’s charged up, he can get great businesses off the ground. Through his latest venture, San Francisco-based EducationSuperHighway, he’s given himself until 2020 to supply at least 100 Mb/second worth of bandwidth to the 70% of American public schools that lack it.

EducationSuperHighway is an initiative for k-12 schools to get “high speed Internet in all public schools so America’s children can take advantage of the many new technology opportunities for twenty-first century learning,” said Marwell in a November 22 interview.

Most public schools don’t have high speed access to the Web. “An astonishing 70% of public schools – 40 million students – have the equivalent of an old dial-up cable modem,” he explained.

Unlike dropouts Mark Zuckerberg and Bill Gates — Marwell actually completed his undergraduate degree at Harvard in 1987 and earned an MBA there in 1992. Marwell proudly announced that the foundations of those two Harvard dropouts had contributed a total of $9 million to support EducationSuperHighway.

The Facebook CEO parted with his cash due to his belief in its mission. As Zuckerberg said, “When schools and teachers have access to reliable internet connections, students can discover new skills and ideas beyond the classroom. The future of our economy and society depend largely on the next generation using and building new online tools and services, and I’m glad to support EducationSuperHighway’s work.”

Marwell likes to work on companies for about seven years. Since 1987  he has started telecom, software, hedge fund and consumer retailing companies. He said, “Collectively, these businesses have created thousands of jobs and generated billions of dollars of revenues and investment returns.”

In 1995, his telecom company, INFONXX (now known as kgb – with what Marwell said was ”$700 million in annual revenues and 7,000 employees”), charged people 22 cents for directory assistance compared to 82 cents per call from the phone company, according to The Morning Call.

The hedge fund is San Francisco-based Criterion Capital Management — Marwell was a partner there from 2003 to 2010. “Criterion is a telecommunications, media and technology long-short fund that grew from $4 million to $1.5 billion in assets under management. In 2010, I reached the end of my next seven year cycle. I’m a builder. I needed to build something,” said Marwell.

Before starting his entrepreneurial career, Marwell attended public schools in Madison, Wisconsin where his late father was a professor of sociology. After graduating from Harvard, Marwell was a consultant at Corporate Decisions where his mentor was the prolific author, Adrian Slywotzky.

After leaving Criterion, Marwell decided he needed to work on “something with a mission.” He was inspired by former Lazard banker, “Felix Rohatyn’s book Bold Endeavors, which contained 10 vignettes about big American infrastructure projects like the Erie Canal and Rural Electrification — every one was propelled by a person with a vision — eventually the government got behind it.” explained Marwell.

Marwell decided that he wanted to be one of those visionaries. He said, “I was on the board of my daughter’s school in San Francisco, The Katherine Delmar Burke School. I thought the school should adopt the idea of flipping the classroom — using tools like Kahn Academy. But the school didn’t have enough bandwidth. I thought ‘If this San Francisco private school does not have enough bandwidth, how many public schools don’t have it?’”

Marwell started EducationSuperHighway in January 2012 after a meeting at the White House. According to Marwell, “I was at a meeting in the White House with Aneesh Chopra, the U.S. Chief Technology Officer, with 15 Silicon Valley CEOs. I talked about how the typical school does not have enough Internet bandwidth and got support for the mission of upgrading Internet access in every public school.”

Achieving this mission requires EducationSuperHighway to “overcome four key roadblocks: 70% of schools don’t have enough bandwidth; most school districts lack people with the technology skills to design, build, and manage a high speed network; schools pay way too much — $25 per megabit per month versus the $2 they should be paying; and government policy” lacks sufficient ambition, explained Marwell.

By 2020, Marwell hopes that EducationSuperHighway can figure out which schools need upgrading, get the funding from E-Rate, figure out the technical requirements in each school, and make the WiFi and bandwidth upgrades happen in those schools.

If Marwell succeeds, perhaps Rohatyn can update Bold Endeavors with a chapter on EducationSuperHighway.