The vision of drones delivering packages for Amazon unveiled this week may be a bit too fanciful for people residing in the world’s major cities, says the founder of Paris-based wireless device company Parrot, one of the world’s main manufacturers of toy drones.

“I think it is funny,” Henri Seydoux said in an interview. “It is very adequate for America because a lot of people live in places where they have a house, a backyard, but for cities like New York or Paris, it will be much more difficult.”

“I am more a software engineer, so I think the drones are very useful to collect data.”

Amazon has unveiled a vision of drones bearing small packages within 30 minutes of an order becoming as common as delivery trucks in the years to come.

Seydoux says it will be a long time before such drones swarm the sky, but he sees an ever growing market especially for hobby drones and for those that gather information. Parrot, which markets its high-definition camera bearing AR.Drone 2.0 for less than $300, expects to sell 200,000 units this year, an upward trend that should increase after new models are introduced next month, Seydoux says: “If you look at the business of the drones, it is increasing a lot.”

He said how exactly drones are used in the future will follow other trends in technological development. “At the beginning there is no market, nobody knows what is the usage. This was true for example for the PC and for the Internet,” he said. “Nobody knows how long it will take to transform the idea of the technology into products. Something sure will come.”

“This is, in a certain way, the magic and the craziness of high tech.” 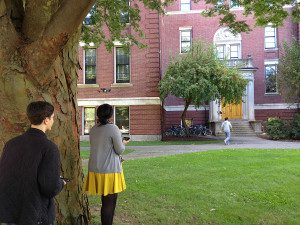 Harvard students studying privacy and technology issues use a AR.Drone 2.0 to spy on other students in September 2013, (Photo by Sean Hooley)

Copter-like small drones are already seeing growing use in agriculture, architecture, journalism, film making, law enforcement – and in crime. “Of course, the police, the drug dealers, will have usage for the drone,” said Seydoux. “Both sides use the same technology.”

Mentioning criminals operating their own drones armed with cameras raises the question of whether the public should fear a future with skies populated by drones. And what about privacy? Could they peer into people’s bedrooms?

“This question is a question you can accurately ask about most of the technologies, and from my personal point of view, this question is not more accurate for drones than it is about cell phones or the Internet,” Seydoux said. “I have seen more problems with people knowing what you do through your Internet connection.”

He also said his drones, which typically can fly for only 20 minutes on a charge, are too limited to pose a threat to privacy. Over time Seydoux sees drones becoming commonplace, much as airplanes have over the past century. “At one time flying was very, very dangerous and very difficult to understand,” he said. “Today flying an airplane is super safe.”

Seydoux said Parrot would unveil some new variants of its drones at the Consumer Electronics Show in Las Vegas in January, moving more into the realm of moving robots with cameras.