Beyond The Party: Inside The Booming Business Of The Yacht Week 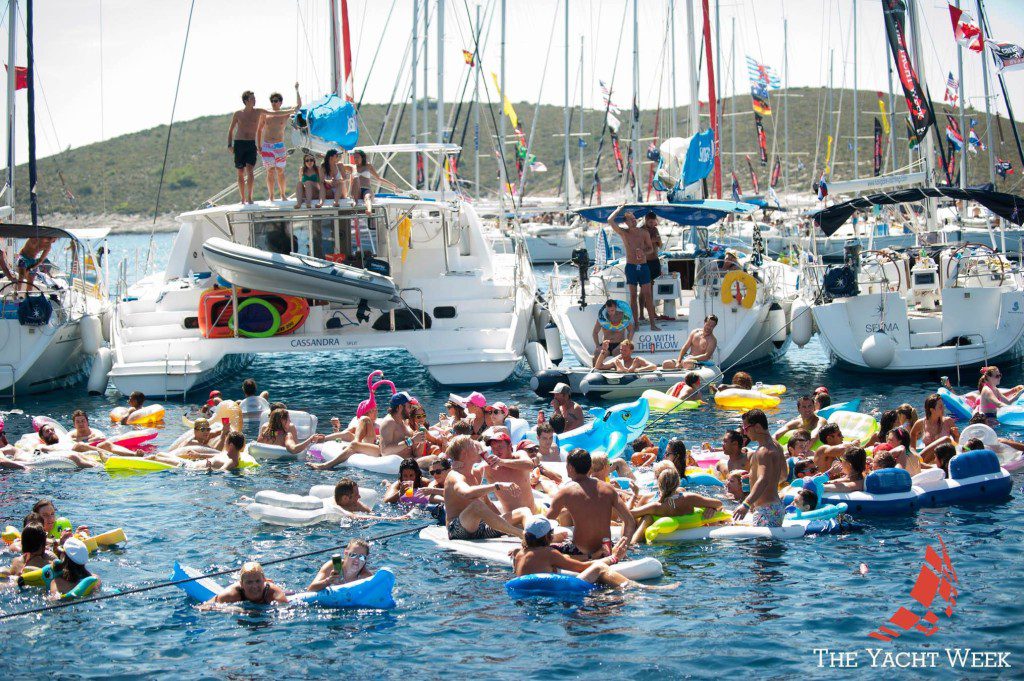 Alcohol and boats, what could go wrong? (Credit: Doonja Dopsaj for The Yacht Week)

It’s 3 a.m. on a clear night in August, and as 100 sailboats rock quietly in a bay off the Croatian island of Solta, a massive dance party set on a rocky perch above is just ending. Six hundred international partygoers descend a hill above the shoreline, exhausted as they near the end their seven days.

In tank tops and bikinis, boat shoes and board shorts, some wait for dinghies to ferry them to the outlying boats, which have also served as their homes for the last five days. Others hop from boat-to-boat, filching drinks and making friends along the way. It’s easy to spot the skippers, mostly young men from the UK and Australia, since tonight they’re dressed in adult-sized animal onesies—a fox, a rabbit and a panda among them.

When a large, Independence Day-worthy firecracker launches from a nearby boat and explodes in the starry sky above, the crowd cheers in approval. But as the embers reach the brush, parched from weeks of Adriatic sun, a small fire ignites. Seconds later it’s as big as a bonfire and illuminates a swath of the scrabbly hill. Remnants of large, destructive forest fires can be found across Croatia, and for a moment it looks as if the entire hill could go up in flames. From a boat, four Yacht Week crew members jump into the water and frantically splash at the fire until one climbs up on the rocks and sprays an extinguisher. When the flames die down, there’s a small golf-clap from the ragged few still paying attention.

As I watched this scene from the back of a boat 30 yards away, I thought of something William Wenkel, the CEO of The Yacht Week, told me about his business a day earlier, which now seems absurdly prescient: “It’s all about putting fires out, everywhere,” he explained. At the time, he didn’t mean this literally.

But it’s easy to forget that The Yacht Week is a business, and when you sell customers the party of a lifetime—and generally deliver—it pays to expect some mishaps. “We do everything right, from corporate structure to liability, to legal due diligence,” Wenkel assures me. “Sponsors go through our business and say, ‘Hmm, looks like you’re covered everywhere.’”

But still, mishaps on the ground can’t be prevented, only minimized. Customers leaving The Yacht Week after seven days of partying generally do so depleted. They also bring home minor injuries—a swollen foot from stepping on a sea-urchin; kinks, or worse, from cliff-jumping; bruises and scrapes from navigating sailboats and rocky coastlines in the dark. The trick is keeping these mishaps small–as in no forest fires.

Despite the fact that, in terms of drinking habits, skippers and crew members are largely indistinguishable from their customers, they take risk management seriously. At the crew-boat party, for instance, I witnessed a skipper firmly banish a group of women off the top of the boat, a spot generally reserved for crew members and select guests. Their crime? Dropping a glass. While the women protested that it was a routine, minor accident, the message from the crew was clear: we no longer trust you and we’re not taking any chances.

This kind of attention to risk has allowed The Yacht Week to become a formidable business operation in the face of routine drunken absurdity. Wenkel, along with COO Erik Biörklund, and CMO Johan Corthesy, own the entire company, having never accepted outside funding. They’ll do sales of $9 million this year, compared to $7 million in 2012. Wenkel expects to do $12 million in 2014. Profits were $350,000 in 2012, and jumped to nearly $900,000 this year.

Anchoring those profits is an attractive, inventory-free business model. The company makes most of its money as a sales channel for local sailboat-rental companies, or “charter” companies, taking up to a 20% commission on each rental. With an average week-long rental price of $6500 in Croatia, that means the company takes in about $1300 on each sale. (The $9 million sales figure is gross sales. The Yacht Week actually realizes commission revenue closer to $2 million.)  So while charter companies get stuck maintaining, storing and paying for the total cost of the boats, The Yacht Week’s expenses include little more than marketing, technology and labor on the ground. Just 14 people work full-time at the corporate office in London, while another 200 or so work seasonally as skippers, hostesses and crew members.

The commissions from yacht rentals make up the majority of the company’s revenues while sales of wrist bands, which grant wearers access to The Yacht Week parties, along with skipper services and brand sponsorships, make up the rest. Wrist bands are a default purchase for customers and cost $67 (50 Euros) each. Assuming every customer in 2013 buys a wristband—not an outlandish assumption—that’s another $600,000 in high-margin revenue.

The vast majority of boats also hire a skipper provided by The Yacht Week. Skippers are paid, at maximum, about $675 per week. At a minimum, in Croatia at least, the company charges about $880 for the service. The margins vary according to the composition of a boat (all male boats get charged much more), the qualifications of the skipper (more experience means better pay), and location. But as the company does more volume this will become an increasingly meaningful segment of revenue and profit.

And then there are the sponsorships. Sperry, of boat-shoe fame, is the biggest in terms of visibility, paying upwards of $50,000 each year for brand sponsorship on the website and promotions on the ground. A representative from The Yacht Week says that commitment should double for 2014. Skyy Vodka pays another six figures for sponsorship and event production in Italy.

The company’s roots trace back to 2006, and its rise has coincided with that of Facebook, meaning it’s been able to cut traditional marketing and customer acquisition costs to a fraction via social media. Their 2009 promotional YouTube video, produced as a favor by a friend who had created music videos for the popular electronic group Swedish House Mafia, attracted hundreds of thousands of views within a year. Total cost: about $1000. Today their marketing machine consists largely of footage and photos of The Yacht Week itself, along with promotional events in cities like New York, Munich and Monte Carlo.

The strength of the business has allowed Wenkel and his partners to expand aggressively in recent years. In addition to The Yacht Week they run four businesses under a holding company called European Travel Ventures (ETV): The Ski Week, Yachts and Friends, Skipper Academy and Fort George.

It’s like The Yacht Week, but with ski lodges in the Alps. The company is running the first inaugural Ski Week in Obertaeurn, Austria in March 2014. When they opened bookings for the event in September, all 500 spots sold out in 35 minutes. Prices start at $850 for accommodations, a week-long ski pass, and Yacht Week-style parties.

European Travel Ventures owns 70% of the operation while the remaining equity will go to Ski Week CEO Leo Alsved, a longtime skipper manager for The Yacht Week, after a 5-year vesting schedule. The first event should be immediately profitable according to the company. Given demand for the event, ETV expects to run several more Ski Weeks in Europe in 2015, in addition to a potential event in North America.

Yachts and Friends is the most ambitious, technology-driven project underway at ETV. The idea is to create a sort of Hotels.com for sailboats, a comprehensive booking system for rentals around the world. The company currently has 1400 boats available in seven destinations, including Thailand, Turkey and Sweden. They expect to have 2000 ready by spring.

The model works like The Yacht Week, but writ large. The company takes a 15-20% commission on each rental and provides skippers and hostesses on request. “For a long time these yachting companies have eked out a profit by selling these boats to old, rich white men,” Wenkel says. “We’ve proven that it’s equally easy to rent out the same boat to a young student who has zero interest in sailing.”

ETV owns 90% of the operation, while CTO Erik Bosrup will take the remaining equity.

As The Yacht Week grows and Yachts and Friends gains traction, ETV needs a reliable source of trained skippers. (The company employed 150 skippers this past year, but may need up to 300 in 2014.) That doesn’t exist, so they’ve created their own skipper factory. Skipper Academy is an eleven-day course in Croatia. For a fee of $800, graduates get an RYA Coastal Certificate and guaranteed employment at The Yacht Week or Yachts and Friends–billed as “the best summer job in the world,” by Wenkel.

Nestled high on a hill overlooking two natural bays on the Croatian island of Vis, Fort George is a impressive piece of property. The British constructed it in 1813 to maintain power in the Adriatic during the Napoleonic Wars. It’s since served as a working fortress for the Austro-Hungarians, and later, Yugoslavia under the Tito regime. 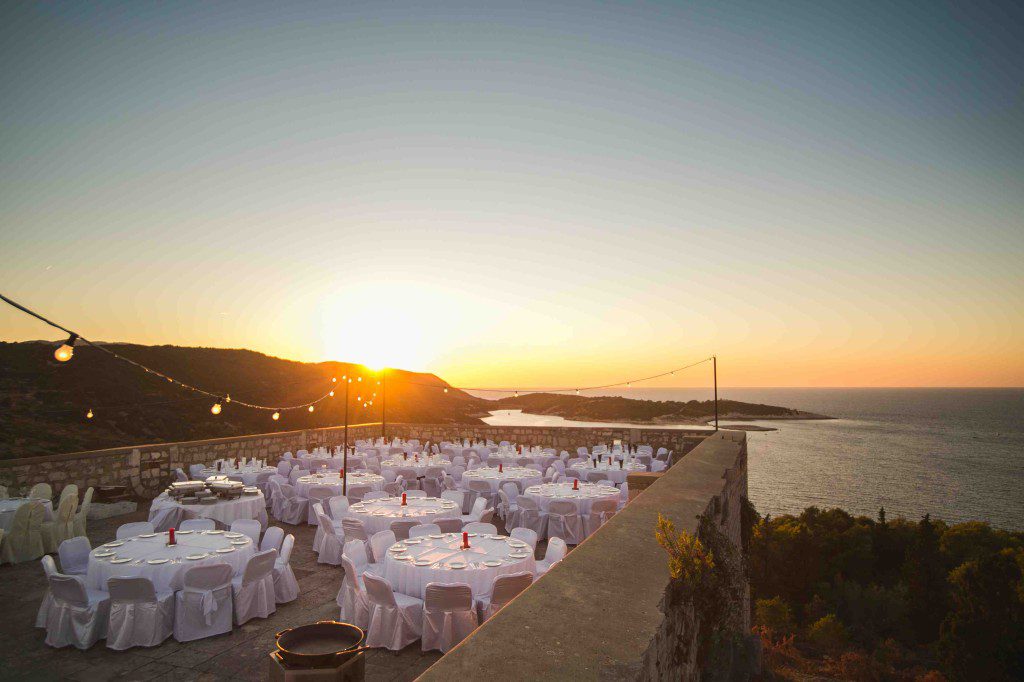 The roof top at Fort George.

Today, after ETV signed a 25-year lease with the Croatian government, it’s undergoing a $1 million renovation funded by The Yacht Week profits. The company is turning the spot into an events space and cultural center, leasing it out for $7,000-$9,000 during the high season. The cocktail bar is staffed by models from Berlin, while an in-house historian from Oxford regales visitors with stories of the property’s past. The goal is to attract artists and musicians from the region for weekly shows and exhibitions when the space isn’t used for events.

Though The Yacht Week still visits the site two nights each week during the summer season, Wenkel hopes to bring in an older, more-moneyed crowd for weddings and corporate events. The operation is wholly owned by European Travel Ventures, but given the cost of renovations, the company doesn’t expect it to be profitable for another two years.