Authors: Social Entrepreneurship At Scale The Solution To Global Poverty 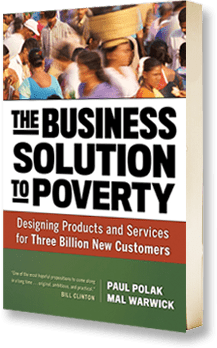 Paul Polak and Mal Warwick, authors of the Business Solution to Poverty: Designing Products and Services for Three Billion New Customers (Berrett-Koehler Publishers 2013) argue that only business motivated by a desire to help the poor and executed at massive scale has the potential to end global poverty.

According to the authors, approximately 2.8 billion people live on less than $2 per day. Not only is the group of people extremely poor, they also represent a multi-trillion dollar market. By building a business to address the needs of at least 100 million of them, social entrepreneurs stand a can attract the capital required to grow the business.

On Monday, December 9, 2013 at 5:00 Eastern, Polak and Warwick will join me for a live discussion about the solution to global poverty.

Tune in and listen while you work.

Polak founded IDE 30 years ago to sell low-cost treadle pumps for irrigation to poor farmers in Bangladesh,ultimately increasing their collective income by $150 million per year. He has launched four social enterprises himself, all of which he intends to scale to 100 million customers. Two of these are already providing millions of poor people with access to clean, affordable drinking water. He is also the author of Out of Poverty, which is widely used as a text on practical solutions to poverty. In 2008, Polak founded the nonprofit D-Revn to bring some of the world’s top designers together to work on products to serve the 2.8 billion people living on less than $2 per day. Nearing 80, Polak remains actively engaged in his businesses.

Warwick is a serial entrepreneur and impact investor who coauthored Values Driven Business with Ben & Jerry’s cofounder Ben Cohen and has written or edited 18 other businesses. Warwick is also the Chairman of Social Ventures Network. He founded Mal Warwick | Donordigital, a fundraising firm that helps nonprofits raise money in 1979. In 2010 he launched One World Futbol Project a for-profit, mission-driven business that sells nearly indestructible soccer balls in the developing world–half a million of them so far. Warwick lives in Berkeley where he has been recognized for his contributions to the local community.

This interview is part of a series that will examine what can be accomplished in the fight to solve the world’s biggest challenges within the next thirty years. The solution to every big problem also presents opportunity; entrepreneurs will use these opportunities to change the world. From this series of interviews, a book will emerge, working title: Thirty Years to Peace.